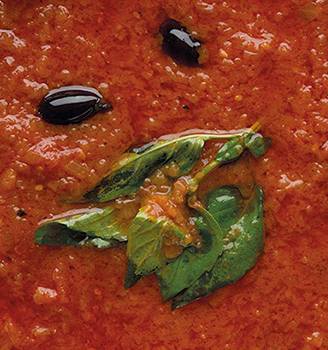 Cook Better by Nikki Werner and Brandon de Kock is a genius book, the kind that makes you want to smack your forehead (put down the pasta spoon first) and say, “now why didn’t I think of that?” A runner up for Sunday Times Cookbook of the Year, Cook Better is an essential in any home cook’s kitchen for the simple reason that it will make you a better cook.

Take a simple tomato pasta sauce. Easy right? Easy enough to make, but to make it well is another story. Nikki’s sauce – borrowed from Chef Peter Templehoff who got it from Giorgio Locatelli who in turn got it from his Nonna – is supremely simple (only three main ingredients), but when added and cooked for the right amount of time, the result is special.

Compare the recipe below with Brandon’s tomato sauce (he calls it Man Sauce) for another similar yet different take on a classic. Which is your favourite? Learn to cook better by getting the book from any good bookstore or online retailer.

To make our point, we’re illustrating the onion chapter with tomato sauce. Not ketchup for French fries but red sauce for spaghetti(known as pomodoro in Naples and Napoletana to the rest of the world). The sweetness of fully caramelised onions balances the acidity of tinned tomatoes, and just goes to show: cook your onions right and you need never add sugar again.

When chef Peter Tempelhoff shared his go-to tomato sauce, it became my go-to tomato sauce. Sure, it takes two hours to make, but there are only three main ingredients (tomatoes, onions, olive oil) so I can make it from memory.

Set a medium-size pot over low, heat the oil and add the onions and salt. Put the lid on and sweat the onions. After 20 minutes the onions will be one amalgamated mass (with a semblance of crunch) and the olive oil will have separated out. It should have retained heat with the lid on and be bubbling energetically.

Take the lid off and keep cooking and stirring for another
10 minutes until the onions are softer and a deep golden colour.
After an hour the onions will start to stick to the bottom. Stir well and add the tomatoes and olives.
Simmer on a low heat until the tomatoes break down and the sauce thickens – about an hour. Keep stirring so it doesn’t ‘catch’ (burn). If it gets too thick, add a little water.

Add the basil, season again and pass through a mouli twice for a smooth sauce. If you don’t have a mouli, use a potato masher.

Cook the pasta (see page 68), toss with the sauce and serve topped with lots of Parmesan and freshly ground black pepper. This shows how a recipe can be tailored to personal taste – similar ingredients underpinned by sweet onions, yet completely different from the previous sauce.

I gave this recipe to my colleague Ian who was getting into cooking. I told him knowing how to cook onions is a game-changer. Now his wife and kids think he’s a genius.

Put the onion and butter in a pot over a low heat (lid on for the first 15 minutes) for about an hour until caramelised (as in the previous recipe).
Now add the garlic and tomato paste, turn up the heat to medium or medium-high and cook the mixture until it’s all sticky and starts to smell toasted.
Chuck in the olives and the tomatoes. Fill the tin the tomatoes came in with water and pour it into the pot.
Simmer on medium-low until it’s reduced by half – this should take about an hour.
Blend in a mouli (don’t use a vrrr-vrrr because it’ll go all orange), season well with salt and pepper, and eat.

An Italian baroness once told us that when making her tomato sauce she uses onion or garlic – never both. We were staying on her farm, a 45-minute train ride from Naples, and there was a perpetually simmering pot of bright red sauce on the stove.
It made sense; onion and garlic are of the same family and have similar qualities, so logically one could stand in for the other.
So if you don’t feel up to peeling an onion, you still have options; it’s possible to build a sauce from a base of garlic.