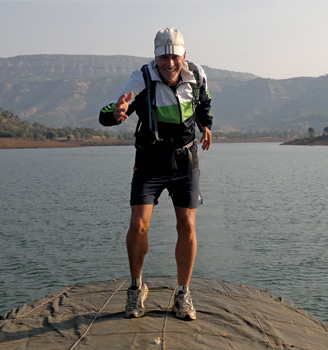 “A short back and sides with a klap, please.”

Blog post written by Tudor Caradoc-Davies. India is other wordly. There’s no getting around it. From the huge size of the country, the vast differences in regions, people, food, customs, wealth and poverty – it’s just one of those places … Continued

India is other wordly. There’s no getting around it. From the huge size of the country, the vast differences in regions, people, food, customs, wealth and poverty – it’s just one of those places that hits you each and everyday with its beauty and ugliness, chaos and serenity – a constantly morphing typhoon of contradictions and juxtapositions as a huge portion of the world’s population just tries their hardest to simply get by.

In David Grier’s book India Lost & Found – Madcap Adventures, which charts the maverick athlete and former chef’s running adventure from the Northernmost Hindu temple in Kashmir to the Southernmost temple right at the tip of India at Kanyakumari – you get a real sense of this incredible country’s otherworldly feel. It is something that occurs not just in the expected times and places like the temples and the cities, but also permeates the mundane elements of every day life.

“Getting a haircut in Rajasthan is an experience. You sit in a chair and get your hair done to your liking (quite easy for Andy seeing as there is not much on top) have a shave etc, but each barber will have a different ritual to finish off the experience. It’s a surprise the first time.”

“He’ll finish shaving you, you sit back to admire how good-looking you are and the next minute this guy klaps you from this side, slaps you from that side and attempts twist your neck off, before raising his hands in the air as if he’s just tied up a steer in record time. That’s the finishing touch. Doesh, doesh, klap, and you’re turning around, about to say, “What the #@$!?”

“I’m not sure if the point is to wake you up after your haircut or what, but after a while you look forward to it because each guy has a different ritual. Then you get into another area where the guy will just finish cutting your hair and shaving you and let you go. It’s a bit of a letdown. You start to think, “come on, where’s my slap?”

Pick up and lose yourself in David Grier’s epic story, India Lost & Found, available from all good bookstores. Click here to find out more.

‘Good luck, my friend.’ Simple words said in passing by a holy man to David Grier on the streets of Mumbai. Grier didn’t know the man; he hardly saw him, in fact, but that encounter was a sign that the madcap idea he was investigating – whether or not it was, in fact, possible to run the length of India – was something he had to do. With his hardy yet comical crew, he set off to run from the northernmost Hindu temple in the Himalayan foothills of Kashmir right down to the southern tip of India. Armed with GPSs, maps and helpful directions, they got lost in India. But through its beauty, its heaving masses and the remarkable resilience of its people, they found themselves, 93 days and 4 008 km later, emerging a whole lot wiser at their journey’s end.