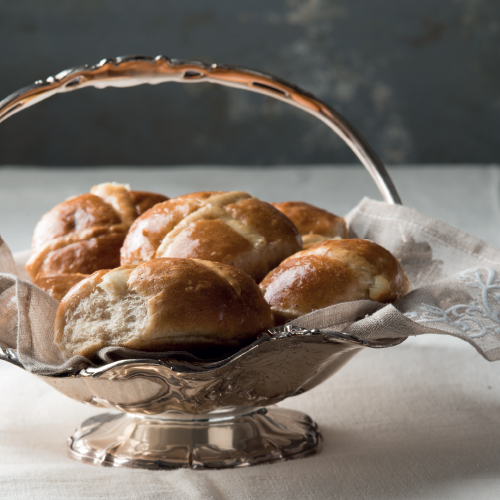 ‘Good Friday comes this month, the old woman runs, with one or two a penny hot cross buns…’ According to Smithsonian.com, the quotation above is the first definite record of hot cross buns – it comes from a 16th and … Continued

‘Good Friday comes this month, the old woman runs, with one or two a penny hot cross buns…’

According to Smithsonian.com, the quotation above is the first definite record of hot cross buns – it comes from a 16th and 17th century text. But the hot cross bun is even older than that: as Alicia and Carianne Wilkinson tell us in A Year At Silwood, this delicious Easter treat is ‘older than Christianity. Indeed, it was not always blessed with a cross and was, at one time, the only cake eaten by the pagan Saxons in honour of their goddess, Eastre. The Christian clergy, unable to ban the bun at Easter, decided to have it marked with a cross so that its eating became legal, and the hot cross bun became traditional Easter fare.’

This year, why not take the time to make them yourself?

For the piped crosses:

For the syrupy glaze:

To make the buns, sift the flour, salt, sugar and spices into a bowl then rub in the butter or stir in the oil. Sprinkle over the dried yeast and mix in well. Make a well in the centre of the flour then pour in the water and beaten egg. Mix to form a slightly sticky dough, adding more liquid if necessary. Knead until smooth and glossy then place in a bowl, cover and leave to rise in a warm place, until doubled in bulk. Knock back the dough, lightly knead again then roll to form a rectangle. Sprinkle over the fruitcake mixture then roll up like a swiss roll. Weigh the dough and divide into 12 equal pieces, then shape into tight round buns. Set well apart on a greased baking tray, cover with a damp tea towel and allow to prove until doubled again in bulk.

To make the piped crosses, sift into a bowl the flour, baking powder and salt. Rub in the oil then add sufficient milk to form a piping consistency. Place in a plastic bag, snip off the tip and pipe to form crosses on the buns.

To make the syrupy glaze, in a saucepan over a gentle heat completely dissolve the sugar in the water then increase the heat and rapidly boil for 2 to 3 minutes, to a syrupy consistency.

To glaze, generously brush the buns with the syrupy glaze as soon as they come out of the oven. Note: this must be done immediately to keep the buns soft.