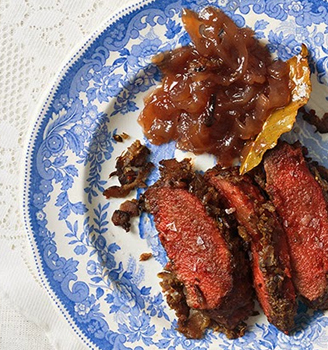 The coming months are a time of road trips, long dusty journeys off the beaten track through small towns that make up the heritage hinterland of South Africa’s national palate. It was in these kinds of towns that for her … Continued The coming months are a time of road trips, long dusty journeys off the beaten track through small towns that make up the heritage hinterland of South Africa’s national palate. It was in these kinds of towns that for her book Karoo Kitchen, Sydda Essop painstakingly tracked down, profiled and sourced recipes from the people of the Karoo, the beating heart of South Africa’s interior. In one such town, Victoria West, she spoke to Rev, Manus Duminy who taught himself how to cook based off his mother’s simple adage that, “If you can read, you can cook.”

“We have a rich food culture in our country. There is a strong Asian influence, but we have a mixed bag of cultures and we should acknowledge our food traditions, especially those of the Karoo.”

“I’m not finicky about food. A sheep is an interesting thing: it gets better if you start eating from the outside and move inward, and form the back, moving forward. My ouma used to cook offal and minced pluck and make brawn. It was poor man’s food! When I go home my ma still males offal, leg of mutton, and liver in caul fat – all the things I like. Once she cooked ostrich giblets and asked my brother: ‘Do you think Manus will eat this?’ He replied: ‘You know Manus, he’ll eat anything.’ I will eat anything as long as it doesn’t bit back!”

“The world may come to an end around you, but if you can cook together and eat together, you’ll never forget each other.”

While we’re not going to feature Manus’s mother’s ostrich giblets recipe, we do have his recipe for Springbok fillet with a biltong crust, served with onion marmalade. Just the idea of it gets our mouths watering.
Karoo Kitchen is available from all good bookstores and online retailers.
Springbok Fillet with a Biltong Crust, Served with Onion Marmalade
Serves 4
1 springbok fillet of about 1kg
salt and black pepper
100ml cake flour
2 eggs, beaten
cup very dry biltong, finely grated
onion marmalade:
6 onions, cut in thick rings
olive oil
150ml red wine vinegar
3 bay leaves
2 cloves
cup sugar
100ml red wine
Preheat the oven to 160 C. Season the meat with salt and black pepper to taste. Roll the fillet in flour, then in beaten egg and finally in biltong. Oven roast for 15-20 minutes until the meat is cooked on the outside but still pink inside. Wrap in tinfoil and leave to rest in the warming oven for 10 minutes.
Meanwhile, to make the onion marmalade, stir-fry the onions in olive oil until soft. Add the red wine vinegar, bay leaves, cloves and sugar. Bring to the boil, turn down the heat and simmer until the liquid has been absorbed. Add the red wine and allow to cool until the mixture has become sticky. Heat a cast-iron ridged pan until it is smoking hot and pan-fry the fillet quickly on both sides. Cut the fillet in portions and serve with onion marmalade.
← Previous Next →