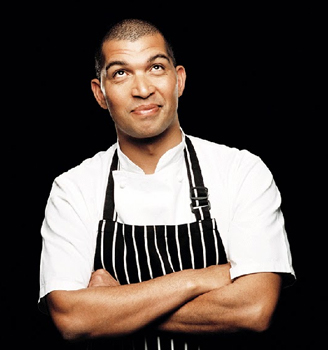 There’s a moment at any braai when the wolves close in. They are your “mates” but they might as well be invading hordes by the way they are behaving. One tries to distract you, another engages in some backseat … Continued There’s a moment at any braai when the wolves close in. They are your “mates” but they might as well be invading hordes by the way they are behaving. One tries to distract you, another engages in some backseat braaiing by commenting on the way you handled that chop, while yet another asks if he can nab one of your beers. Your attention all over the place, your guard down, all of a sudden a hairy paw dives in and tries to steal a bit of boerie, the edge of a lamb chop or that extra sticky marinated edge of a rack of pork ribs. Your scorching hot tongs or a knife comes down in defense and suddenly the braai gets a lot noisier.

All of this could be avoided if you brought out the oepsies as Reuben Riffel advocates in Braai Reuben on Fire. Delicious morsels that you braai on the fire early on, they keep the wolves from the door and give you the space and time you need to work on the main piece de resistance.

Reuben’s oepsies include lamb tails, a braai fondue, peri-peri chicken wings and many other delicious yet unusual items like the Pink Poppadum (crispy salmon skin). One of our favourites is The Turtle aka, the Marine Skilpaadjie. A riff off the traditional land-based skilpaadjie (tortoise) which usually consists of boerewors meat and or liver wrapped in bacon, for his marine version Reuben incorporates oysters wrapped in salmon slivers, cooked on an oak braai plank over the coals.
Check out the recipe below and get this game-raising braai book from all good bookstores. Also available online from Kalahari.com. The Turtle aka The Marine Skilpadjie
[Norwegian angels on horseback]
Makes 6
A skilpadjie (little tortoise) is a magical thing, with liver or boerewors filling wrapped in lamb’s caul fat or bacon and braaied into crispy bombs. This is a play both on skilpadjies and on the bacon version of angels on horseback, using Norwegian salmon instead of bacon and wrapping it around an oyster. Fresh little pockets of rich ocean goodness that will reconfigure your ideas around what skilpadjies can be.
6 medium oysters, flesh only
6 Norwegian salmon or smoked salmon slivers, about five to seven millimetres thin
1 tsp Dijon mustard
1 tsp honey
2 pinches fennel seeds
2 sprinkles smoked
Maldon salt
½ tsp extra-virgin olive oil
½ apple, thinly sliced
1 radicchio leaf, julienned
1 sprinkle cracked
black pepper
½ lime, cut into pieces
1/ Wrap the oysters in the salmon slivers.
2/ Smear the mustard evenly in the middle of an oak braai plank. If you don’t have an oak plank, other braai planks will do but it’s not compulsory. Soak the planks in water for about 10 minutes before using.
3/ Use French oak wine barrel chips for the smoking process. Follow the instructions on the pack.
4/ Place the wrapped oysters on the mustard, leaving about five millimetres between each. Drizzle evenly with honey. Sprinkle with fennel seeds and Maldon salt, then drizzle with olive oil.
5/ Place the plank in the Weber over medium-low heat and cover. Smoke
for about eight to 10 minutes.
6/ Remove from the heat, sprinkle with apple and garnish with radicchio. Crack some black pepper on top and serve with the limes on the side.

The quintessential South African cooking style, Reuben takes you on a roadtrip through his past from hunting and cooking pigeons on the farms of Franschhoek as a kid, to his travels. In Braai, Reuben on Fire, he challenges you to lift your game above the simple tanning of a chop and burning of boerie.

The dishes are unmistakably South African in flavour and feel. From new versions of standard rockstar South African ingredients to digging deep into the spectrum of what is possible on a braai, Braai − Reuben on Fire is a book for any braai fan keen to take their skills to the next level.