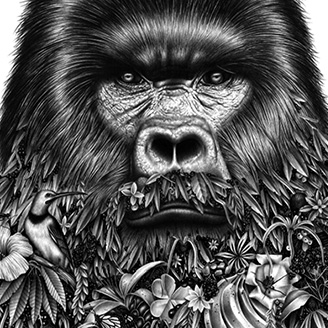 What’s on our minds this week

An insight into what keeps the Quivertree Elves ticking: Libby Doyle – Creative Director Libby has been staring deep into the eyes of Violaine et Jeremy’s Le Gorille (the Gorilla for non-Francophiles). She says, “the simplicity of lead and paper … Continued

An insight into what keeps the Quivertree Elves ticking:

Libby has been staring deep into the eyes of Violaine et Jeremy’s Le Gorille (the Gorilla for non-Francophiles). She says, “the simplicity of lead and paper and the wonder that has been created with imagination and detail is what struck me about this. Of course the thought of a little illustration studio in the middle of Paris and spending hours and hours crafting doesn’t hurt…”.

Craig has been digging into Fool Magazine and “the best food photographer in the world” (his words) Per-Anders Jorgensen. Vicki, a keen gamer says, “I’m currently in my second play through of Far Cry 4 on PS3 – it’s pretty epic. Anyhoo, I came across a mildly amusing glitch in the game the other day. My character was running along the shores of a lake when suddenly a croc came out of the shallows and attacked an innocent deer that was sipping quietly at the waters edge. (See dead deer leg in lower left corner of image). “I was overcome with vengeance and immediately unloaded my automatic rifle into the hide of the toothy beast. Instead of sinking to the bottom of the lake as expected, the croc thrashed and then face planted, bottom up. Take a look at the pic! I stood there for a couple of minutes to see if gravity exists in games but it doesn’t. He stayed like that. Ha!”

Amy-Jean has been investigating Corita Kent, a somewhat forgotten activist and pop-artist of the 60s and 70s. “Her bold use of colour, non-conformist use of typography and layout and her social commentary is still inspiring today, if not more so than it was in her time. Believe it or not, Corita started out as a nun but left the sisterhood to pursue her passion. A retrospective exhibition Someday is Now: The Art of Corita Kent was co-curated in 2013 by Ian Berry, who said of her: ‘An ‘artist’ was from New York. They were a man; they were an epic, abstract painter. And she wore a habit — she just didn’t look like what the, sort of, movie version of an artist looked like.’” More about Kent and her work here and more about why she’s made a come-back here. If you happen to be anywhere near Pittsburgh, Pennsylvania, the retrospective is now on at The Warhol.

Of our two Megans, Megan Goble is wondering if she should have spent more time studying Sun Tzu’s Art of War before paintballing on the weekend. As a direct consequence, she is also marvelling at the diverse colour palette to be observed in the average bruise.

Finally Megan Fraser just bought her 5th copy of The Art of Racing in the Rain by Garth Stein. One of those lifer books you just have to own, she says, “I keep giving it away and never getting it back but it keeps calling me… I have to have a copy, always!”