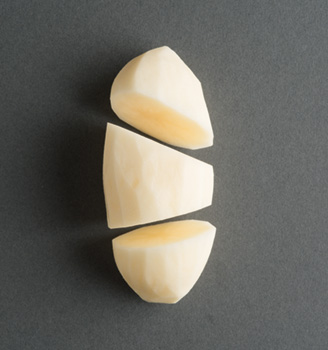 The secret to great roast potatoes

Blog post written by Tudor Caradoc-Davies. In every family there are the dishes that are assigned to one family member as theirs. Mum’s roast chicken, Uncle Nigel’s ribs, Aunt Tabitha’s quiche and someone, SOMEONE, has to excel at the lofty … Continued

In every family there are the dishes that are assigned to one family member as theirs. Mum’s roast chicken, Uncle Nigel’s ribs, Aunt Tabitha’s quiche and someone, SOMEONE, has to excel at the lofty station of roast potato king.

A roast potato is only really a success if the outside is crunchy and the inside fluffy in our opinion. Applying their years of cooking experience and experimentation, in Cook. Better Nikki Werner and Brandon de Kock have perfected a range of the most fundamental and best-loved dishes that most people claim to be able to make, yet somehow never get quite right. For anyone who has ever has a roast potato that is too soft, too hard, too pale, too cooked or undercooked, fear not. With their take down of the roast potato and the following tips on perfecting the noble spud time and time again, you (or whomever in your family is designeated potato driver), will soon go down in family legend as the king of the kartoffel.

Maximum surface area
Depending on the size of the potato, we cut it into two or three pieces – more sides mean a higher crunch-to-centre ratio.

Parboil the potatoes
Besides taking pressure off during the roasting stage, partial cooking softens the edges, making them easier to fluff up.

Rough ’em up
Either bang them about in the pot (instructions to follow) or use a fork to score the surface. It’s the shaggy surface on each potato that will become golden crust.

Preheat the fat
When potatoes land in dangerously hot fat they’re off to a good start – it galvanises a crusty outside from the get-go.

Avoid overcrowding
Give the potatoes their space; each should have enough breathing room to develop crisp edges and corners (and be turned comfortably). Too many potatoes will slow the process.

The fat you use can greatly improve the flavour of your roast potatoes. Our mothers used sunflower oil, we sometimes use bacon fat, but duck fat lends a slight sweetness and depth that’s unsurpassed. The good news is jars of duck fat are now available from supermarkets, butcheries and specialist food stores.

Preheat the oven to 220˚C and place the rack in the middle. Fill a large pot with cold, salted water – this should be deep enough to cover the potatoes once they’re in.
Peel a potato, cut it into thirds and drop in the pot of water (to prevent browning). Continue with the rest of the spuds, adding them to the water as you go.
Put the lid on and bring it to the boil over a high heat. From the moment they start boiling, time 4 minutes, then remove the pot from the heat and drain the potatoes in a colander.
Tip the potatoes back into the pot. If they’re going straight into the oven, this is when we add plenty of salt and pepper.
Replace the lid and string a dishcloth up through one handle, over the lid and down through the other handle – pull the dishcloth tight, turn up the edges and grip them tightly over the handles to keep the lid on. Then shake the pot with all your might to tumble the potatoes and create those rough edges.
Drop the fat into a roasting pan and heat in the oven until smoking hot.
Gingerly add the potatoes to the pan one by one – they should spit and pop as soon they land. Tongs work well and we say gingerly because it’s easy to splash fat and scald wrists. Turn the potatoes and get them straight into the oven.
Roast for 60 to 90 minutes, turning occasionally, until crisp and golden.

Cook. Better is available from all leading book stores. This is not a cookbook. It’s a book about cooking. Think of it as cooking between the lines. Or what your mother should have told you. Yes, there are recipes, but this book is about the journey, not the destination, so taking centre stage are the hows and whys behind everyday ingredients and techniques – when to use coarse or finely ground salt; best pairings for common garden herbs; extracting and building flavour; champion chopping techniques; foolproof fillet; spud’s lore, jackets and all …