“The evocative journey behind a jewel in the Cape’s winemaking crown.”

This book is a celebration of Constantia Glen’s rocketing success – it’s an historical account, rich in scale, but it’s also the intimate story of a family whose determined vision is underwritten by a deep love for this land. It pays homage to the finely-tuned contemporary operations and advances behind its world-class wine-making, the Constantia Glen team’s unflinching commitment to quality in everything that they do and an honouring of the ‘extended family,’ the Constantia Glen staff – some of whom have worked on the farm for decades. “There’s a lot to be said for continuity,” says Alexander Waibel. “It’s in the way we learn about our vineyards and the way we value the people who work in them.”

Be the first to review “Constantia Glen” Cancel reply 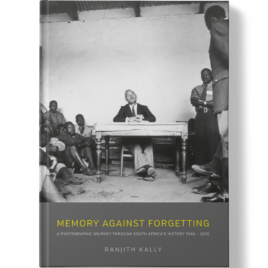 Memory Against Forgetting, by Ranjith Kally "He captured iconic scenes, such as his portrait Umkumbane, which has come to symbolise the shimmering jazz age of African townships in the 1950s. When Miriam Makeba returned to Maseru, Lesotho, for a concert for black South Africans at the height of apartheid, Kally too ventured to Lesotho and returned home with a remarkable image of an exiled singer poised between joy and heartbreak. And in a series of unflinching portraits, he documented with probity the horror of the forced removals in Natal. In short, the wider appreciation of his contribution to our struggle for dignity needs to remembered and fully embraced for current South Africans intent on honouring their past." David Goldblatt SIZE 210 x 285mm HARD COVER, EXTENT 192 pgs. • ISBN 978-0-992216-96-2
not rated R345.00 Add to cart 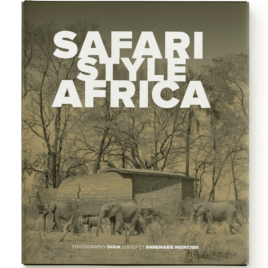 The safari design aesthetic has yoked hi-tech, high-end architecture with traditional low-tech African craft and fused them in a new genre of highly original, courageous and soulful – even sexy – architecture and interiors. This is design that, while rooted in Africa, possesses an international appeal that is beginning to influence aesthetic ideas the world over. Safari Style Africa showcases a selection of lodges where these elements of design dialogue beautifully with the environment. SIZE 240mm x 285mm HARD COVER, EXTENT 280 pgs. • ISBN 978-1-928209-93-5
not rated R300.00 Add to cart 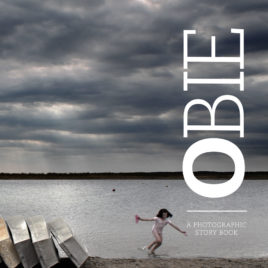 Obie, A photographic story book Obie encompasses a decades-long sweep of his life’s work and covers the globe. It is part coffee-table book, part travelogue, part autobiography and part storybook, with a bit of philosophy thrown in for good measure. It’s a great photographer, documenter and character looking back through his ever-increasing archive (built up over 60 years) and choosing the images that resonate the most, and which have a story to tell. Obie captures the rare, the human, the wonderful, the cosmic even. And he doesn’t just take pictures; he also meticulously records it all in words. His descriptions are often as intriguing, as beautiful or as crazy as his photographs. SIZE 280 x 240mm HARD COVER, EXTENT 250 pgs. • ISBN 978-1-928209-63-8
not rated R500.00 Add to cart